I just saw posted on the LETPRESS list that Tara Bryan has passed away. She was a member of the APA from about 1989 until 218.  Here is her obituary and a link to the site as well: 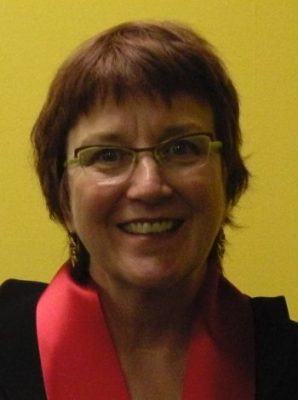 Tara T Bryan was born in Cuero, Texas on October 14, 1953 to Marilyn Jean (Brantley) and Andrew Jackson Tidwell. She passed away peacefully on September 29, 2020.

An award-winning book artist, painter, and teacher, she influenced many in the painting and book arts community in Newfoundland and across North America. Her honors include being elected into Royal Canadian Academy of the Arts for Book Design (2012), the Alcuin Award for Book Design (2018), and the 2010 Long Haul Award (VANL). “Aftermath (cracking up)”, one of her iconic iceberg paintings, was selected as the image for permanent placement on the exterior facade of the St. John’s Convention Center.

She collaborated with artists and writers in the Province and across North America including Di Dabinett, Luben Boykov, Elena Popova, Kevin Major, Anne Meredith Barry, and many others. Her work was included in many exhibitions across Canada, the USA, and abroad.

Tara’s volunteer and community work included being on the boards of Eastern Edge Gallery, VANL-CARFAC, and the Arts & Letters Committee for the Government of Newfoundland and Labrador. A mentor to many, she generously shared her knowledge and her incomparable skills in book design and painting to many artists, and school children through the ArtsSmarts program, the Anna Templeton Centre, private classes, and innumerable workshops at St. Michael’s Printshop. She was always willing to share her knowledge generously to help artists or book makers move forward with their work.

In the last few years, she spent a lot of time in Wesleyville where she bought her little red house and spent time working with fellow artists, teaching, and mentoring others, and walking on the beach with her dogs.

She is survived by her husband, George Jenner, sister, Teresa Tidwell (Catherine) of Maryland, and brother, Terran Tidwell (Janis) of Oklahoma, and good friends too many to count. She will be dearly missed by all.

Instead of flowers, please consider a donation to one of Tara’s favorite organizations: Doctors without Borders, Canadian Guide Dogs for the Blind, Dr H. Bliss Murphy Cancer Care Foundation or the charity of your choice.

With the hearty support of the Board, I declare Jim Daggs a Tramp Printer. This means Jim will receive bundles without the printing requirement. He may, if able, continue to print for the bundle.

Click on any image below for a larger view 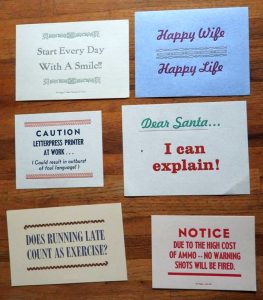 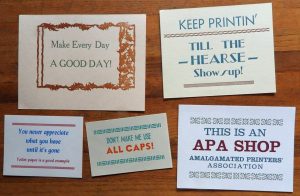 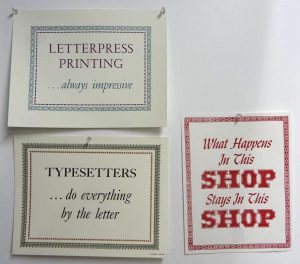 In addition we are dedicating the November bundle to honor the achievements of Jim Daggs. Among the many items in the large bundle, I would love to see many “reprints” of Jim’s bundle pieces. If Jim has a special place in your thoughts, produce a bundle piece and share. Jim is a former President of APA, mailer, and VP. The Printers Hall in Mt. Pleasant IA owes Jim a great debt. Many have benefited from Jim’s Heidelberg Windmill manuals. Other helpful references Jim has produced include literature on the Linograph as well as Linotype. Jim also produced letterpress printed directories for the APA for many years.

Let’s make an effort to show Jim our appreciation.

We are pleased that our membership is concerned about meeting our activity requirements. There is in our constitution a way for members to plead their case for an exemption from printing four items. At the end of the year (December 1) contact Vice President Mark Barbour if you need to be exempt from the printing requirements. Whether you can’t be in your printing location or need to care for elderly or ill, or become ill yourself, we will grant exemptions. Please do not let our requirements add to your stress. We are not removing the printing requirement for all. While our times are unprecedented, we are not yet through the third month of 2020. Many of us will have more time to print in the month ahead than we have had in a long time.

Our mailers have wisely had reasonable precautions in place (wearing gloves, disposing of packaging) even before this pandemic.

Please do not take risks or disobey civil authorities in order to print.

Wishing you all health and peace,

I have been “out of the loop” for awhile with the changes at Yahoo Groups and the apparent collapse of the Yahoo Groups of late….  I don’t think Yahoo even notified me of the group changes via email, I just realized it when I went to check the site.  I had seen a few messages in the San Jose History Park Letterpress group about a new group site at groups.io, along with SFLetterpress.

So, I have set up a new APALetPressGroup at groups.io

This group may be subscribed to at the link below. However, be aware that any non-active members will be removed, as the group is for active members only.  I still have to figure out approvals, etc. for new members.

I will also be sending out an invitation email to all active members as soon as I get an updated list of email addresses from our secretary-treasurer.